New Features And Enhancements of the SQL Server 2014

SQL Server 2014, the latest upgrade to Microsoft’s popular relational database management system has been announced by the company to be available on the market since April 1st 2014. With this new release Microsoft presents some new features to keep up with its high standards imposed over the years.

We were a little bit curious to see what goodies are packed with this year’s release, knowing the fact that with each new release good things are brought on the table. The SQL Server 2014 has numerous new features and enhancements, such as: In-memory online transactions processing engine and the improved integration with Windows Azure. 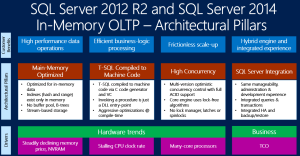 Thanks to this new feature you will see few impressive performance gains as it promises to increase the SQL Server response times for frequently-accessed data. As the company states, some applications can expect up to 20X performance improvement.

In-memory OLTP draws its foundations from the Hekaton project and has been designed to take the advantages of the lower price and increased capacity of RAM which is now available on actual server hardware. With the help of the new feature you should expect a boost in your database app performances.

Sql Server 2014 took some major steps towards improving integration between their on-premise and off-premise services and products with Windows Azure cloud services right out of the box, having the ability to back up Sql database into the cloud. The company will launch a free SQL Server to Windows Azure back up tool which is set to be released on mid of April 2014, that also works with Sql Server 2005, 2008, 2012 and 2014 being very compelling with the DBAs to backup SQL Server data into the cloud. If anyone were interested in reading a complete list of 2014 Sql Server features and enhancements check them over msdn.microsoft.com website.

Here are sufficient reasons to upgrade to the new release, anyway if you feel the need to evaluate the improvement, download the AMR tool and analyze the production workload by yourself.